From a young age, Astorga knew she wanted to become a nurse and serve in the Air Force. After graduating from the University of Auburn with a nursing degree, the Alabama native was commissioned as an Officer in 2000.

She was deployed to Iraq in 2007, and later to Afghanistan from 2010 to 2011. In both deployments, she worked as a critical care nurse in combat theater hospitals, where she worked long hours tending to the injured. However, not all the wounded she cared for were her comrades. Sometimes they were local civilians or even prisoners of war. Astorga recalls, “I had a lot of moral battles and ethical battles while I was there and deployed in those areas. [They’re] human beings as well and when I became a nurse in the military, we take care of all casualties, no matter if it’s our soldiers or the enemy.” If being a nurse in a combat zone wasn’t challenging enough, Astorga also had to navigate a still very male-dominated profession. She said, “I felt like I had to continuously prove myself to my peers, my male counterparts, [and] my male superiors.”

When she returned from her second deployment, Astorga had trouble finding her place within society, and it took a toll on her mentally. Her struggle with depression led her to an early medical retirement in 2013. Following her military career, Astorga worked as a Critical Care Registered Nurse (CCRN) at two private hospitals in Dayton, OH. The emotional pain she endured was still difficult to bear, and she sought support from various Veteran-oriented programs. One day, she came across Women Veterans Network, or WoVeN. WoVeN is a nationwide community of female Veterans whose mission is to provide support and sisterhood to its members. The ideals of WoVeN resonated with Astorga so much that she decided to become a Peer Leader and started a chapter in the Dayton area. Volunteering with WoVeN gave Astorga a new purpose in life: to let women Veterans know they matter and have not been forgotten.

While deployed, Astorga would often watch Peyton Manning’s football games in the breakroom during her downtime. Watching her favorite player gave her a sense of comfort and home during her overseas assignments. On November 8th, Astorga was surprised with a video call from Peyton Manning, who thanked her for her service and her work with WoVeN as a part of the NFL’s “Salute to Service”. She has also been featured in the U.S. Department of Veterans Affairs’ national campaign, I Am Not Invisible, which recognizes female Veterans for their contributions.

Astorga still resides in Dayton, OH. She enjoys spending time with her family and connecting with her WoVeN sisters. Along with lifting others up, Astorga is taking more time to care for herself. “I had been taking care of so many people in my life–patients, family–that I decided I [want to] take care of myself right now,” she says. “That’s where I am; working on a lot of things for [my] mental and physical health, as the years of being in a stressful work environment and all of that I’ve done have, of course, affected me physically.” Astorga is currently training to become a Veteran’s yoga instructor so she can help fellow Veterans with physicality through meditation and mindfulness.

NFM Lending is proud to donate $2,500 to Veterans Yoga Project on behalf of Astorga. NFM looks forward to the opportunity to continue to honor military and Veterans through the NFM Salute initiative.

– From the NFL to NFM. Welcome into our December NFM Salute. I’m your host, Greg Sher. We welcome in Jessica Astorga. She’s an Air Force Veteran of 13 years. Jessica, thanks for being with us, agreeing to be our NFM Salute. And thank you so much for your service.

– So I discovered you Jessica, while watching the NFL, believe it or not of all places. November is the NFL Salute To Service month, and you were featured and you met Peyton Manning. Let’s take a quick look.

– [Speaker] I have someone from the NFL who would like to talk to you.

– First off, thanks for being a great supporter and fan of mine. But more importantly, thank you for your service to our country, and your sacrifice. And just know that I’m a fan of yours as well.

– So what was it like meeting Hall of Fame, Super Bowl champion, and one of the all time greats, Peyton Manning?

– It was quite a surprise. I kind of had talked about, be kind of cool to meet him. Virtually, of course not same as meeting face to face, but I got to meet him.

– So your background is in nursing. You were a critical care nurse. You were in the Air Force for 13 years. You retired as a major. You had two tours. One in Iraq in 2007. And then in Afghanistan, 2010, 2011 for parts of both years. What can you tell us about those experiences?

– And you also as part of your duties, I understand took care of prisoners of war. What’s it like internally to be trying to repair and put back together, those who serve your country, and then in the next moment, taking care of those trying to hurt those very same people.

– I had a lot of moral battles, and just ethical battles. They’re human beings as well. And when I became a nurse in the military, and we take care of all casualties, no matter if it’s our soldiers or, you know, the enemy.

– When did you know that you wanted to get into the military?

– I guess I’ve just grown up having a pride in our country, and just seeing the men who served in the church that I went to, that drew me into wanting to be in the military. I really got serious about it when I was 15 years old.

– Wow! So early. Can you tell us what it was like to be a woman in the armed forces? What kind of challenges you faced and how you overcame them?

– That was challenging, because I felt like I had to continuously prove myself to my peers, my male counterparts, my male superiors. So yeah, there were challenges.

– Coming back into society, in your civilian life, you face some big challenges as many military service members do including bouts of depression. Tell us how you’re doing now.

– I’m doing well. I had been taking care of so many people in my life, patients, family, that I decided, okay, I’m gonna take care of myself right now. That’s kind of where I am. Working on a lot of things for mentally and mental health and physical health. As the years of in a stressful work environment and all of that I’ve done, stress is of course affected me physically. So I’ve been working on my physical health as well.

– You took on so much when you were serving our country. You had family and children back home. What do you remember about when that plane touched down for the final time and you were back on US soil and you were gonna see your kids again?

– I was very excited and very nervous. My children were young, and I was kind of nervous because I wasn’t sure how they would accept me- if they were gonna be kind of apprehensive or what. My son he didn’t quite know what to do. It took him a little while to come to me. That was a little heartbreaking. I have two daughters and my middle daughter came right up to me gave me a big hug.

– So you’ve immersed yourself into some incredible causes that I wanna talk about. You’ve settled in Dayton, Ohio. There’s a lot of military there and you’ve become a big part of WoVeN. What is WoVeN?

– WoVeN stands for Women Veterans Network, and it is women Veterans basically as a way to bring women together. We go through a curriculum kind of focusing more on improving your well-being, quality of life, talk about health and stress and balance, balancing things in your life.

– As part of our NFM Salute, we earmark $2500 to the charity of your choice. You’ve chosen the Veterans Yoga Project, an organization that focuses on mindful resilience. We cannot thank you enough for your service and your sacrifice and all that you did to help preserve the freedom of our people. Thank you for your service and continued success.

– That’s Jessica Astorga, 13 year Air Force Veteran and our December 2020 NFM Salute. What a year it’s been of Salutes. We can’t wait to bring you another 12 in 2021. Happy holidays to everyone. I’m Greg Sher from NFM TV. We’ll see you soon. 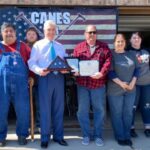 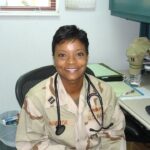