In keeping with tradition, we release our June NFM Salute on Memorial Day to honor another hero and to learn what Memorial Day means to him. Please take a moment to hear the story of disabled Veteran Ryan Garrison, Staff Sergeant (Ret.), U.S.A.F.

Garrison grew up in Princeton, Indiana. With six of his relatives having served in the military, it was only natural that he would follow the same path. As a college student, Garrison worked towards a degree in Sports Medicine when 9/11 happened. “I knew all bets were off, and I had to do what I was supposed to do, which was enlist,” he remembers. So he dropped out of college and enlisted in the U.S. Air Force.

He was stationed at Travis Air Base in California and later deployed to Pakistan in 2002 and Iraq in 2006. As an Air Transportation Specialist, Garrison managed the logistics of all air transport activities. One day while awaiting a shipment in Kirkuk, Iraq, Garrison’s team was attacked by a local sheepherder acting on behalf of the insurgents. A rocket-propelled grenade (RPG) hit a transport vehicle, and the force of the impact threw Garrison backward, fracturing two of his spinal discs. Though he did not lose his life or the ability to walk, his injuries left him with lasting chronic pain and post-traumatic stress disorder (PTSD).

After receiving treatment and returning stateside, Garrison was assigned to Andrews Air Force Base in Maryland, where he performed special airlift operations. He escorted important dignitaries on and off their flights on Air Force One and Two, including Presidents George W. Bush and Barrack Obama. In 2016, Garrison medically retired from the Air Force after almost 15 years of service.

Garrison finished fighting on the battlefield, but now he had to contend with the intense pain and fear he felt within himself. “There was always that part in the back of my head I was thinking there was somebody out there, ready to just fire another rocket at us,” he said. “That constant thought in the back of my head, it would show up in anxiety. At night, I would have dreams of being over there. “

Garrison’s life changed for the better in 2016 when he partnered with a service dog named Luke. “I always say that he saved my life because, with him, he always alerts me to anxiety cues,” he said. “My knees bounce, my hands jiggle, he comes up and just lets me know that I’m getting ready to have one. He wakes me up from dreams, so with my therapy dog, I took a lot less medication, and nowadays, my dreams are once a month. My anxiety attacks are maybe once a week, if that.” Not only was Luke a turning point for Garrison’s mental health, but it was also an eye-opening experience for how nontraditional treatments can benefit Veterans.

In 2018, Garrison founded his own nonprofit, Valor Therapeutics. With his wife Julie, a certified music therapist, he teaches active service members, military Veterans, and first responders to channel their complex emotions through the arts. Once a week for eight weeks, his team leads a small group of “Defenders” through visual arts, music, and yoga. These activities allow participants to understand their feelings in a way talking alone cannot. Garrison likes to call what they practice “complementary therapies” because their holistic approach can enhance traditional treatments that Veterans may also be seeking. “You can only go so far by talking, and around here, it’s very hard to find a therapist,” he said. “Mental health is so important to me and all the Veterans I know that are fighting it.”

Garrison lives in Dayton, OH, with his wife Julie, their children, and his service dog, Luke. Garrison was nominated by the NFM Salute for December 2021, Jessica Astorga. 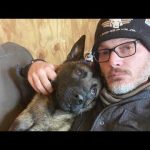 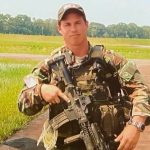