Meg Christ opened the military locker of her father after his death to discover a treasure trove of documents and artifacts from his distinguished time served in the Marines. While honoring her father, George Foster Jr. as our January NFM Salute, Christ shared some of those relics with us.

Foster was born in 1929 in Woburn, Massachusetts. He grew up on a dairy farm and spent much of his childhood milking cows and doing farm work. In 1951, Foster’s idyllic small-town life changed forever when he was drafted into the Korean War. At 21 years old, Foster joined the U.S. Marine Corps.

After completing training in Parris Island, South Carolina, Foster deployed to Korea. He fought in several key battles, including the Battle of the Punchbowl, Operation Bumblebee, and the Battle of Heartbreak Ridge. Having lost many close friends to the war, Foster volunteered to do a second tour of duty in 1953 to honor their sacrifices. When he returned stateside in 1954, he was assigned to be a security guard at the American embassies in Moscow, Russia, and Munich, Germany. One of his proudest moments in the Marine Corps was guarding King Saud of Saudi Arabia for President Eisenhower’s 1957 inauguration and walking in the inaugural parade. After six years of unforgettable experiences, Foster was honorably discharged from the military in 1957.

Foster graduated from college in 1960 at 30 years old with an accounting degree. He soon became a licensed CPA and worked as an accountant in Los Angeles for the U.S. General Accounting Office. Foster was devoted to his family and cherished spending time with his children. The values he learned in the Marines stayed with him after he left the service, and he passed them on to his loved ones. His daughter, Meg Christ, said, “He always taught me when I was a little girl, ‘When you fall down, you get back up.'” In 2022, Foster passed away from cancer, leaving his family with many rich memories and a time capsule of his life that he had hidden away. “He was just a kind soul, was very humble,” said Christ. “So after he passed, finding all of these amazing things he had done, I wish he were here to ask more questions. There’s so many questions. He was amazing.” 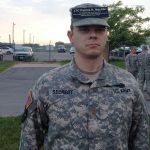