On May 3, 1945, The USS Aaron Ward was patrolling the Pacific near Okinawa, Japan when it was attacked in a kamikaze assault. Fireman First Class, Edward Strine was on board. This is his harrowing story about that day and how he awoke after the attack to see the U.S. flag still waving.

Strine served in the U.S. Navy from 1944-1946, and spent much of his time in the military in the keel of a ship serving in the engine and fire rooms as a Fireman First Class. One of the carriers he served on during WWII was the USS Aaron Ward. On May 3, 1945, the Aaron Ward was attacked by Kamikaze airplanes, leaving Strine on the deck severely burned and dying. While one of his friends was loading up the soldiers who had not survived the attack into body bags to be thrown overboard, he noticed that Strine was still breathing and got him medical help, saving his life. Strine is featured in a book about the attack, and recently hosted a Navy Pilot who has been trying to meet the 13 remaining survivors of the 360 men aboard the USS Aaron Ward.

This month, NFM Lending will donate to Soldier’s Wish in Strine’s name. 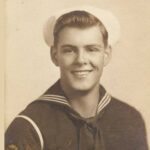 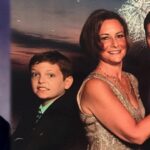