In February of 2020, the NFM TV crew entered the home of Mike and Lisa Houck as we honored their fallen son, Sergeant Eric Houck with our NFM Salute. Eric, a Baltimore native, was 25 when he was gunned down in Afghanistan on June 10, 2017. The pain of losing their son is always with them. It’s just a different kind of pain as the days go on. In this exclusive follow-up, we check in with his Gold Star parents 16 months after our first meeting and once again honor Eric with our July 2021 NFM Salute.

NFM Lending is pleased to once again honor Sergeant Eric Houck as the NFM Salute for July 2021. Houck was previously profiled as the NFM Salute in February 2020. Houck was originally from Perry Hall, Maryland. At just 22 years old and following the birth of his first child, Houck joined the U.S. Army in 2013. While stationed at Fort Campbell, Kentucky, he received his first overseas deployment to Afghanistan to support Operation Freedom’s Sentinel as a forward observer in the 101st Airborne Division. On June 10, 2017, at 25 years old, Houck was one of three American soldiers tragically killed by an enemy combatant in Peka Valley, Nangarhar Province, Afghanistan. Houck was only two months away from returning home. He left behind his wife Samantha and their young children, EJ and Violet. He posthumously received the Bronze Star Medal, Purple Heart, Combat Action Badge, and Army Commendation Medal with a second oak leaf cluster for his bravery in battle. In April 2021, the Perry Hall community dedicated a bridge to Houck and another fallen soldier from the area. Houck’s father Mike said, “That to me is the greatest honor that they could bestow. It’s just so important to us, just for him to be remembered by people in the community.” Four years after losing their beloved son, the Houck family still feels his absence but keeps his memory alive through their stories. “Obviously, it’s something you never get over. Maybe the emotions don’t come to the surface as much as they had previously. We’ve come to terms with the situation,” said Mike Houck. “It’s part of our life. It’s part of who we are. I am more than happy to talk to anybody who will listen about Eric. I mean, he’s my son, but he was a tremendous man.” NFM Salute is an initiative in which one military member or Veteran is chosen each month to be honored as the “Salute of the Month.” Salutes are chosen from nominations on the NFM Salute website, www.nfmsalute.com. The “Salute of the Month” will be featured on the website with a biography and information about their service. Additionally, NFM Lending will donate to a non-profit in the Salute’s name. NFM Lending is proud to donate $2,500 to Mission 22 on behalf of Eric and the Houck family. NFM looks forward to the opportunity to continue to honor military members and Veterans through the NFM Salute initiative. 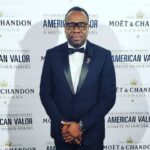