He served in the military almost 70 years ago! Our October 2022 NFM Salute honors a national treasure, Navy Veteran Dick Pard.

Pard grew up in a large family with seven brothers and two sisters. His father served in WWI, and seven children, including Pard, would eventually follow in his military footsteps. In 1954 at 17 years old, he enlisted in the U.S. Navy. “It was the end of the Second World War, and a lot of senior people were leaving the Navy. They were short of people aboard ships, and my brother was serving aboard the USS Bremerton. So I just joined him aboard ship,” he said.

After receiving basic training and specialized training for his role as an Electronics Technician, Pard was stationed on the USS Bremerton. He said of life in the Navy, “We were basically working 24/7 all the time we were at sea. We stood in line at the mess decks to get fed two or three times a day depending on what was going on.” Despite the routine nature of living and working on a ship, Pard visited various countries where he had many unique experiences. “We basically sailed all over the Pacific. On the second cruise we did, we went to the Olympics in Australia,” he recalled. “We did ports like Hawaii and Hong Kong. Our home port in Japan was Yokosuka, and we did Singapore and all over the South Pacific. We sailed a lot between China and Taiwan.” In 1957, Pard left the military after three years of service.

In September 2022, Pard and 23 other Veterans traveled to Washington, D.C., through Honor Flight Network. Honor Flight Network takes Veterans on an all-expenses-paid trip to the nation’s capital so they can visit military memorials and museums. “The first one we visited was the Navy Museum, and that’s the service that I served in. It was exciting. You know, we saw the [memorials] for the Army and Air Force, Korea, and Vietnam.”

Pard lives in San Tan Valley, Arizona. He enjoys playing golf and spending time with his friends from his Veteran’s club.

The NFM Salute is an initiative in which one military member or Veteran is honored as the “Salute of the Month.” Salutes are chosen from nominations on the NFM Salute website, www.nfmsalute.com. The “Salute of the Month” is featured on the website with a biography and information about their service. NFM Lending will donate to a nonprofit in the Salute’s name. NFM Lending is proud to present $2,500 to the Veteran’s Club at Encanterra in honor of Pard. NFM looks forward to the opportunity to continue to honor military service members and Veterans through the NFM Salute initiative. 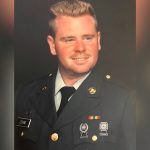 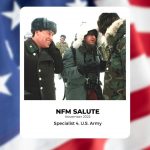