We are proud to announce our NFM Salute for March 2020 is Roger Dennis. In this father and son interview, we catch a glimpse of the memories and hardships of Roger’s service in Vietnam. Tune in as he shares some of his experiences in the 11th Armored Cavalry Regiment. On behalf of Roger Dennis, NFM Lending will be donating $2,500 to the Gary Sinise Foundation. To learn more about Roger and the NFM Salute initiative, visit www.nfmsalute.com.

NFM Lending is pleased to honor Sergeant Roger Dennis as the NFM Salute for March 2020.

Dennis served in the U.S. Army from 1966 to 1972 as a member of the 11th Armored Cavalry Regiment. He was stationed in Vietnam in the region surrounding Saigon (Ho Chi Min City), as well as Lộc Ninh and An Lộc.

Dennis could have avoided the draft, but chose to serve his country instead. “Many of my friends had already [been] drafted and I had four brothers who were in before me,” he explained. “I felt like I couldn’t live a normal life knowing that I didn’t go.”

Dennis was nominated by his son, Roger, who remembers his childhood and when he really understood what his father went through.

“I am eternally grateful to him and to anybody else that served like him. I often think about the differences in my life as compared to his, you know, when he was 19 and 20. I was certainly aware that my father was in the army and served, but I feel like maybe indirectly my dad did somewhat shield me from the nitty-gritty details. He didn’t share that with me until I was older – at least I remember it that way. I remember I felt mature enough to be able to handle the details of a firefight story.”

NFM Lending is proud to donate $2,500 to The Gary Sinise Foundation on behalf of Dennis. NFM looks forward to the opportunity to continue to honor military and Veterans through the NFM Salute initiative.

Full Transcript of Video Interview is Below:​

– Welcome into NFM TV. I’m your host, Greg Sher. It’s a story of admiration, a story of courage. A story of an unbreakable bond between father and son. Roger Dennis is a branch manager at NFM Lending. His father, Roger Dennis Sr., served in Vietnam. He is the subject and recipient of our March NFM Salute. What’s your first memory, Roger, of you know, when you realized that your dad was a hero? That he did serve.

– I am eternally grateful to him and to anybody else that served like him and I often think about the differences in my life as compared to his, you know, when he was 19 and 20. I mean, I certainly was aware that my father was in the army and served. But, I feel like maybe indirectly, you know, my dad did somewhat shield me from the nitty gritty details. He didn’t share that with me until I was older at least, I remember it that way. I remember that I felt mature enough to be able to handle the details of a firefight story.

– [Greg] Take us back to when you were drafted. What do you remember about that?

– Well, I was workin’ on bridge construction, building bridges and concrete and steel. And one day I got the valentine in the mail. That’s what me and my friends called it, which was your draft notice. We pretty much knew when we got the draft notice that we’re probably gonna go to Vietnam.

– You had the option to get out of the draft. Talk to us about that.

– Because many of my friends who had already gotten drafted and went and because I had four brothers who were in before me, I felt like I couldn’t live I couldn’t live a normal life knowing that I didn’t go.

– [Greg] What do you remember about your time in service?

– I think it was the third or fourth day that I was there, they called out my name and said that I was gonna be sent to the 11th Armored Calvary. But within a month and a half, Colonel Patton decided that the mortars were not being utilized properly. And then the officer of the mortars was also the FO, The Forward Observer expert map reader and when we left for the field in January he needed a driver. And so they put pressure on me and I became the driver. He taught us also how to be expert map readers. So that if something happened and you needed to call in like air strikes around your position, helicopter strikes down, artillery, that you learned how to do that. I learned how to do that.

– What do you remember about the Vietnamese people?

– You know, the people wanted to be like we are. They wanted to be free. When we would ride down the road the little children would be beggin’ for food. And we would throw them food. Many of them had become orphans because of the war.

– [Greg] In other words, you’re throwing them food and then you could be, you know, unfortunately their parents could be victims of the war.

– The pain that you feel, how do you describe it?

– Well, it would be people who you were very close to. And like one day, they’re gone. Happened right in front of ya.

– Can you tell me about what it was like to have seen what you saw in Vietnam? And a year later, you’re having a child.

– I was very looking forward to it. It’s such a culture shock to come from the combat zone and then come back into civilization. The Veterans Affairs at that time did not offer any kind of like counseling to the soldiers returning. You were on your own, you were, you know, try to fend for yourself.

– We’re gonna take a look at some mementos from your service in Vietnam. I understand these are boots that you wore in the Vietnam war and why’d you save these?

– You know what Greg, I mean these are good and bad memories. You know like, I wanna think that there’s more good than bad they’re something that, like, when I’m gone that like my grandkids can see and be reminded of. This is Class A uniform that you’re issued when you go into basic training. The most prominent medal you can get would be the combat imagery medal which is here at the top. Then this shows the different specialized training that you go through in basic training and advanced temperature training. Well, when I was sent to Vietnam, I ended up at 11th Armored Calvary. And this hat came about when they were formed before they were Armored Calvary, when they were just the 11th Calvary, horse calvary in 1901. I go to the wall, the Vietnam’s Veteran Wall on Memorial Day, you know, at the end of May and also Veterans Day and I would say probably half of the people from my outfit 11th Armored Calvary would show up wearing these hats.

– We actually have another pin for you. I don’t know where you wanna put this, but this is the NFM Salute pin.

– Put that around the hat. Very cool.

– You’re one of us now. We appreciate you opening up your home to NFM and to NFM TV and for accepting the NFM Salute for the month of March 2020. And on your behalf, we’ll be making a $2,500 contribution to the Gary Sinise Foundation, thank you.

– Thank you, Greg, thank you so much. 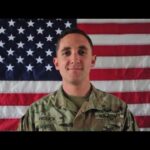 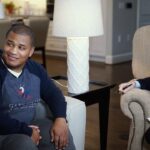