Retired Marine Captain Jason Haag’s challenge to stay alive only intensified as he left the carnage of war behind him. Our May 2022 NFM Salute gives us a window into the long road many service members face when they return from intense combat. His story is sure to move you.

NFM Lending is pleased to honor Captain Jason Haag, USMC (Ret.), as the NFM Salute for May 2022.

Haag was undisciplined and a few steps away from damaging his life as a youth. When Haag was 18 years old, a judge warned him he needed to shape up or risk going to jail. Haag chose the former and enlisted in the U.S. Marine Corps in December 1999.

In 2003, Haag deployed to Baghdad, Iraq, as part of Operation Iraqi Freedom. He recalled how terrifying the experience was, explaining, “I’d have to say that was probably the worst combat deployment that I did. I was in a hole in the ground, getting shot at, getting blown up the whole time.”

Haag’s life changed forever on April 9, 2003, when he received his first battlefield injuries during a firefight. Haag was hit with machine gunfire, and a rocket-propelled grenade went off near his head. Despite his injuries, Haag continued his service and completed two more combat tours in Fallujah in 2008 and Afghanistan in 2013. Eventually, the physical and mental trauma sustained during his service greatly affected his well-being. As a result, he medically retired from the Marines in 2013 as a Captain. For his leadership and injuries, he received a Purple Heart, the Afghanistan Campaign Medal with a bronze star, Global War on Terrorism Expeditionary Medal, and the Iraqi Campaign Medal with three bronze stars, among others.

After leaving the service, Haag found himself in the darkest, loneliest place he had ever been. Suffering from post-traumatic stress disorder (PTSD), Haag experienced debilitating depression, anxiety, and night terrors, which manifested into a substance addiction. He rarely left his house, instead choosing to be alone in his basement to self-medicate and nurse suicidal thoughts. “It was more sitting and being in a dark space all alone with my own thoughts, numbing it with pills, alcohol, and just trying to get up the next morning,” he explained. “I’ll be real; I was hoping I didn’t get up the next morning.”

Haag’s loved ones encouraged him to seek help through therapy and support groups, but nothing he tried worked. Finally, someone suggested he apply for a service dog. In 2012, a German shepherd named Axel came into his life. The trajectory of Haag’s life changed course from a path of pain and hopelessness to one of perseverance and optimism. “I absolutely credit him with saving my life at my worst point after I retired,” he said. “He can do a whole bunch of different things for me. His big thing was nightmare interruption. He definitely helped me mitigate my medications by just making it easier to cope with daily life.” With Axel by his side, Haag’s mental health improved, and quickly the two became inseparable.

Since being paired with Axel, Haag has made it his mission to promote the use of service dogs for Veterans with PTSD. He was instrumental in drafting and endorsing Virginia State Senate Bill 177, which expanded the definition of “service dog” to include dogs that assist people with non-physical injuries. In 2017, Haag founded his nonprofit Leashes of Valor (LOV), which trains and provides service dogs to post-9/11 Veterans at no cost. LOV works with those struggling with invisible wounds, such as PTSD, traumatic brain injuries (TBI), and military sexual trauma (MST). Their comprehensive program ensures the Veteran is compatible with the dog, and they want to conquer their internal battles. LOV’s motto is “One leash saves two lives.” They have placed 21 service dogs with Veterans.

Haag lives in Bowling Green, Virginia, with his family. He believes Axel was destined to save his life, saying, “His birthday is on the anniversary of the first day that I was wounded, so it was kind of meant to be.”

The NFM Salute is an initiative in which one military member or Veteran is honored as the “Salute of the Month.” Salutes are chosen from nominations on the NFM Salute website, www.nfmsalute.com. The “Salute of the Month” is featured on the website with a biography and information about their service. NFM Lending will donate to a nonprofit in the Salute’s name. NFM Lending is proud to present $2,500 to Leashes of Valor in honor of Haag. NFM looks forward to the opportunity to continue to honor military service members and Veterans through the NFM Salute initiative. 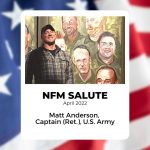 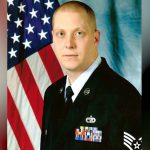